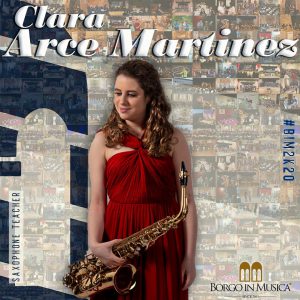 Clara Arce Martínez (Valencia 1996) began her saxophone studies at the High Conservatory of Castilla-La Mancha, concluding her career in 2019 with highest qualifications. There, she studied with the professors Antonio Felipe Belijar and Claude Delangle.

Nowadays she is studying a master degree in musical research in the International University of Valencia.

Since 2019 she works as saxophone teacher at the Professional Conservatory “Vicent Vera” in Sueca (Valencia).

In 2017 she was chosen to play as soloist with the Castilla-La Mancha High Conservatory symphony orchestra. She has participated in the European Saxophone congress in Oporto in 2017 and in Mallorca sax international festival as a soloist in 2018. As well, she has performed a variety of concerto and chamber music programs around Spanish geography, and some others in Portugal, Italy and Germany.

She was awarded with some prizes: